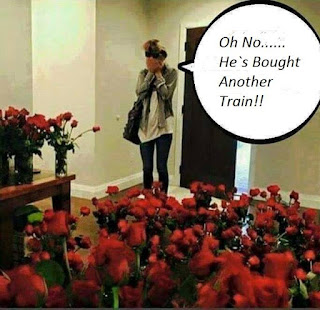 Well I did state in my original post that I was going to take my time, and it worked out that way.

But I'm pleased to report that I've finished the project 99.9%.  They have been equipped with Loksound Select decoders, two speakers each, and microleds for lighting. The remaining work is a little weathering of the couplers and uploading the correct sound file to them. Currently they have an incorrect EMD645 Turbo sound, but ESU is due to release the correct EMD567 Turbo sound file sometime during this month, and they will both then receive the correct file.

Here are two side views of both units. 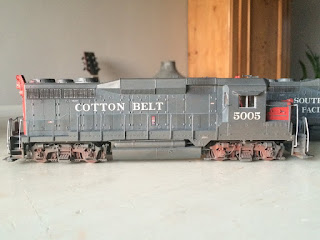 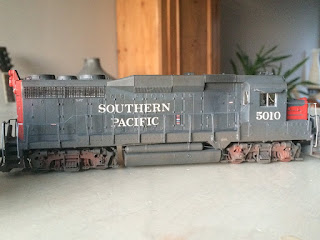 Build two models of a GP30, one Cotton Belt, one Southern Pacific, using the Lifelike / Walthers GP30 HO model.
A good friend of mine recently asked me to build / detail a GP30 for him. In return for my efforts, he'd give me a second GP30 model, to keep, as long as I detail that too.
I had to think very hard for the next 2 seconds, and then accepted.

So here are the locomotives, one is a Lifelike, one a Walthers (one is B&O, the other KCS). I will try to take my time with these, but enthusiasm may well get the better of me. 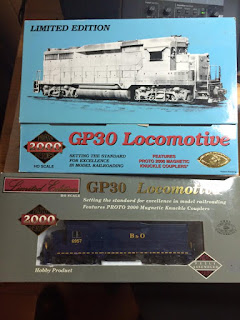 I still had another Lifelike Proto 2000 locomotive in a drawer that I intended to turn into a Southern Pacific locomotive.
I decided I try to make a reasonable representation of a phase 3 GP9 (recognised by it's 3 large fans on the long hood, as opposed to 4 small and 1 large) after rebuild , turning it into a GP9E, and this one was equipped with a Farr filter housing on the long hood.
The other 'unusual' spotting difference is that it never had the typical SP light package. 3816 was delivered to the T&NO subdivision and had a standard light package, and later in it's life received a roof beacon. This is how I modeled it.  It is almost done. I still need to install Kadee couplers, numberboard lettering, and weather it, but everything else (including ESU loksound decoder, Sugarcube speaker, and LED lights ) has been done. 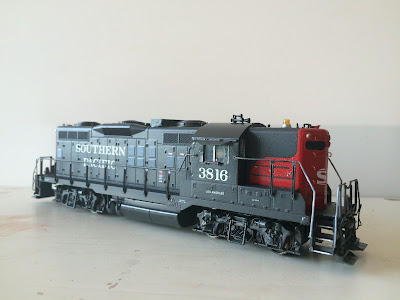 
Below a quick review/first impression of the TCS Wowsound decoder (diesel version).


I recently completed a Lifelike SD9, in which I installed such decoder (bought mine from Coastal DCC), my version had keep alive attached, as a longer loco like this has more space.
The irony is that small locos benefit the most of it, but they haven't got the space, but that's life..

Back to the Wowsound. After installation, I did my usual thing, set the loco on a programming track and fired up Decoder pro, to do some of the set up. It turns out that is not the best thing to do, as the decoder definitions available are not yet completely bug free, and struggle a bit with all the indexed CV's that this (and other) decoders use.
I ended up messing the decoder up a bit and it didn't respond as I wanted it to, so I performed a factory reset. I then used my DCC system (Lenz) in programming track mode and programmed the basic settings in the loco, such as it's address.

I then proceeded to try and set up the rest using the audio assist function. I have to say, listen carefully and it all makes sense. It is very, very easy to do and very powerful.
Using this, I was able to assign the desired combination of function button, output wire, lighting effect , and conditions (fwd, rev, both directions active) etc.
I then followed the instructions to calibrate the locomotive for prototype operations. This is an easy two step process too.

The powerful thing is that you can toggle the function buttons to perform different tasks, they are divided in light mode and sound mode.
Lets say the decoder is in light mode, pressing F2 would activate a roof beacon if that's what you have programmed it to do. A double press on F8 will toggle it to sound mode, and then F2 will operate the bell for example. (The toggling does default give you audible feedback on which mode you select, but turns out this can be disabled, and I prefer that. Leaving this on initially, is probably good until you get used to the way it works).
This is useful for throttles that have a limited amount of function buttons available, and/or saves you trying to scroll down to higher number functions.


In prototype mode, the loco behaves more like the real thing. Leaving the controls in light mode therefore will mean that when you increase the throttle , nothing happens..
Why not? That's because you haven't released the brakes, and they are tied in with a sound effect, which in turn is in sound mode..

So switch to sound mode, press F6, hear the brake release hiss and presto the engine revs up and smoothly departs to the speed you have set. The Engine Notches will respond to the load, so a light engine, will not rev up as high and as long as when it is trying to move a long heavy train. Very nice!

The sound files in the decoder are of very good quality, and at least on a par with the newest loksound files. Very clear, very realistic.

Is there something negative to report? Depends.

I am not a fan of 'directional lighting'. I want independent control of my lights. (when switching in the yard, I want both lights to be able to turn on, no matter which direction I travel). With the exception of the white and yellow output wires , all is free programmable, but these are default set for front and rear lights, which are activated by pressing F0.
However there is a work around. I connected my headlight to the white wire , activated by F0, but was able to set that effect for 'BOTH directions'. I then did not use the yellow output (as it would have worked at the same time as far as I can figure out at this time), so I used the next (GREEN) wire for the rear light. I gave that the constant bright light effect too, for both directions, and assigned to F1, with F2 assigned to purple for my roof beacon.
It means that I've lost one output wire, but with the decoder having 8 function output wires, I don't miss it, I still have spare capacity.


What remains to be seen is how well I would be able to speed match this loco through it's speed range with other decoders, but that would also mean switching it to 'traditional' throttle mode, which makes the decoder respond like any other decoder, turn up the throttle, the loco moves, turn it down it stops.
In prototype mode, as mentioned above, it works like the real thing, with throttle (engine notches depending on load) doing the speed, but only when the brakes are released. Switching the throttle to 0 means the loco keeps on going, very slowly losing speed, but it doesn't really begin to decellerate until you apply brakes, and how much brake force you apply. One press is 20% braking, and subsequent presses increases it by 20% until it comes to a hold.
Dynamic brakes (if the loco has these set up, on by default) also work, the engine can be heard reving up, as is the dynamic brake fan, and the engine slows down too. But be careful. Releasing it without turning the throttle down means the engine will speed up again.

All in all, it brings a new dimension to operating your loco, and one I wholeheartedly recommend you try out for at least one of your locomotives.

Fancy something different from the usual DPM, Walthers city buildings?

Want to build something a bit more challenging, and realistic looking.

Have a look at Down Town Deco buildings. These are made of Hydrocal / Gypsum, and when finished look very realistic. What's more, they offer some designs suitable for more run down areas of town too.  I really like these.

I've added a link in the list to the right too. 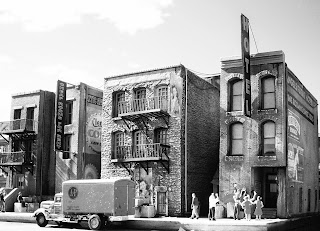 As you know I also model the California Northern.
I'm always on the lookout for models, and now found one online. I have another SD9 myself that I need to repaint and detail in similar colours, but here is no 202.  Painted and detailed by Sean Bartlett.

The CFNR had 4 of these, two were ex Southern Pacific (numbers 202 and 203), and two were ex DM&IR (numbers 200 and 201). The SP's are recognised by the remnants of their light packages, while the others can be recognised by the remaining nose bell, and smaller fuel tanks.
They left the CFNR roster by the end of 1997 after they were no longer needed due to a downturn in traffic from Willits (Lumber) and the closure of a pipe manufacturing plant. At least two still survive, but were repainted, and had their short hoods replaced by low noses, working for an industrial customer.  The fate of the others is unknown to me at this time. 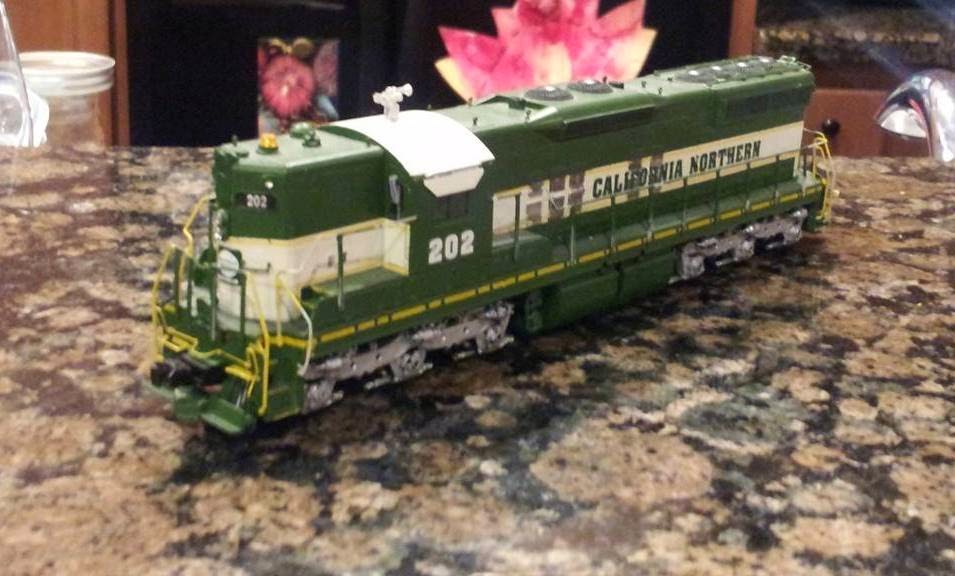